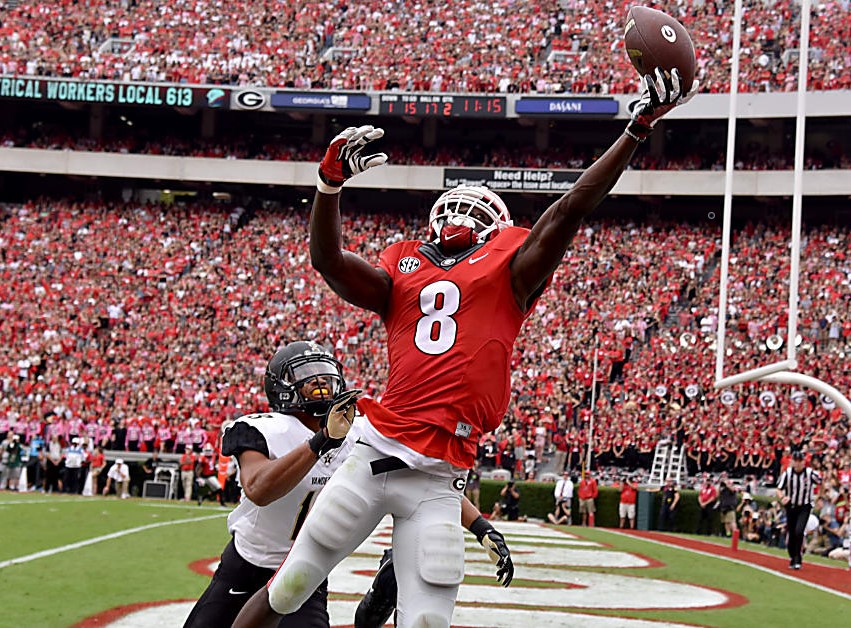 This grouping is made up of the few WR’s that are so talented they can play all 3 positions at a high level. With elite skills like speed, explosion and ability to separate they are able to impact the game from the X, the SLOT or the Z spot off the line. Hell, with his size, DK Metcalf could play TE if he wanted to! These should be the players that get the most consideration on our Board and change the conversation a little in terms of position value.

GOOD: DK Metcalf is an insanely rare physical specimen. His play speed, explosiveness and physicality are off the charts elite. He is incredibly explosive out of his stance, gets into his stem and breaks with power and quickness. Can really out-muscle the DB as to render them completely ineffective. Very hard to bring down in the open field. An absolute load once he gets to his second gear. Massive weapon from all levels of the field.

BAD: Shows poor hand angles at times, especially when high-pointing the ball which will mean dumb drops and losing a 50-50 ball now and then. Must work hard to polish his route running from all slots. In the NFL they will match his physicality and push him off his routes. His neck injury and eventual surgery in 2018 is extremely concerning. There was talk that he might never play again in the early going.

Real lack of productivity for a player with his measurables. His stats below highlight the lack of playing experience, only being heavily involved in the game plan in about 19 games his entire college career, so no wonder he has some detail work to do. Shockingly low number of targets during his time at Ole Miss. They had several other good weapons there to spread the ball to, but is there something we are missing that Metcalf could not be trusted on the field?

BOTTOM LINE: Obviously NFL teams will do extensive medicals on him to determine what risk remains long term. This to me increases the risk of failure (ROF) to 40%. Without the injury I would estimate ROF at only 10%. With the elite measurables and physical ability, Metcalf is a MUST consider in the mid 1st Round, but could fall to Round 2 if medicals scare teams off. Position value increases due to his abilities, but buyer beware.

GOOD: Parris Campbell offers incredible speed, decent body control at the catch point but he brings elite open field running ability. These are the things that allows him to play from all 3 slots effectively and impact the game. He is weakest over the middle, but elite up the boundaries and across the back side. His play speed is what allows him to get open and his separation ability comes from quickness and loose hips that allow him to hit his breaks hard and change direction on a dime. Really strong YAC guy due to his quicks and ability to process the field instantly, finding daylight and extra yards.

BAD: Campbell lacks desired physicality and is not a refined route runner. Lacks the height you’d prefer especially if he is going to play X predominantly. With a lack of strength in his body and hands, he’s not going to win a lot of 50-50 balls either. Needs to catch the ball clean and turn into a runner with little interference to be at his best. Not a blocking asset yet, but gives effort. He doesn’t have an extensive injury history but in the NFL he will take a beating and needs to get stronger.

BOTTOM LINE: As long as you don’t require a super physical WR tool, Campbell has absolutely blue-chip juice and great field vision to get you YAC. His blazing speed and slippery moves requires DB’s to be ready to tackle him or they will find only air as he jump cuts and blows by them. His SPARQ Score tells the story of a very explosive athlete.

He will not outfight DBs for the ball, however, or get off the jam every time until he gets stronger. Shockingly low production until his senior year. Likely stuck behind other high quality receivers. WR2 as immediate starter, with WR1-A upside. Great value in Round 3, but given his speed will likely see a team grab him by the bottom of Round 2.