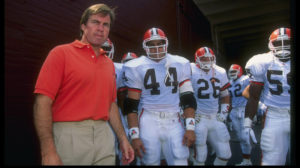 Walk with me for a minute…let’s stroll a little ways into the past. How about all the way back to 1995. There were some pretty significant team-related events in ’95 and ’96 you will recall:

For now, I am going to skip over the fact that the day the NFL owners approved Art Modell’s request to move the Browns franchise to Baltimore was ON MY FUCKING BIRTHDAY…it does explain a lot about my sense of duty in supporting the team, maybe some cosmic interaction. My wife thinks I am mentally ill but that’s just her opinion.

More importantly though, I am trying to draw attention to the coach who was fired that year. Billy Boy, who we like to call The Hoodie, was also a victim of Art Modell’s astonishing mismanagement and corruption. He was shown the door when the relo happened, and we all know how this turned out.

The Hoodie found his way to New England and became the winningest coach in NFL history. Never mind that part. The key is that despite this nearly unprecedented event, which brought the City of Cleveland tremendous angst, anger, confusion and fear, The Hoodie walked out more convinced than ever that ahead was the opportunity to create a career that would bring him absolute success. Provided he landed in the right place (stable, patient ownership), he knew that he was going to build a dynasty by building it the right way – HIS way. Without FEAR.

The Hoodie left the CLE in 1996 knowing that he was not afraid. Supreme confidence was part of his super powers. He already knew he was smarter than most of the people who ran franchises or coached them. He had already proven he had an eye for hiring coaches and choosing players. His trump card, besides the fact that he would out-fucking-work every human being around him? He feared nothing but the chance he might fall short of his own ambitions.

So why am I boring you with this history lesson? Because now is OUR time. This is NOT the time FOR FEAR or conservatism. We must walk forward in this world without fear for how the future of the Browns will turn out. The right things are in place now. The Hoodie knew he could never be successful if he didn’t have a franchise QB. The fact he lucked into Tom Brady in the 6th round so early in his career is simply one of those incalculable strokes of luck that is part of his story now. We also needed a little bit of luck…

Our job now, and Buddy Boy’s job now is to proceed without fear and without caution in making every fucking aspect of this team world class. We might have a Top 3 QB you guys, not just an Andy Dalton. Baker put up insane numbers without playing the entire season and not taking a single rep with the first team prior to his first start! We give no quarter, we don’t hesitate to fire ANYONE that can makes us worse or hire ANYONE who has a chance to make us better. That means players and coaches, trainers and nutritionists. Buddy Boy has already shown us he has no fear and gives zero fucks. It’s time for us to join him.

We are still showing a loser mentality when we freak out that they might get rid of Williams and Kitchens who won us 7 games (and a TIE!!). Starting in 2019, that kind of record is going to be considered a FAILURE of a season. That record is still below average! Ten to twelve wins and the playoffs will become our fully reasonable expectation probably starting in 2020. We have a shot at that for 2019 but we might not quite be ready. All in good time. And NO FEAR.

Here is a couple PFF stat stacks for you to chew on while you’re thinking about whether to retain Williams as HC and Kitchens as OC. This bit of data may lead you down the path I am headed with my NO FEAR predictions of what happens with the guys. Who you want leading this team for the next 8-10 years? And one note: Williams Defense numbers below are for full year #2…the Offense under Kitchens was 8 GAMES so he was only able to influence half of these results….

Personally, this data makes it easy for me to see the path forward. Look for my other post where I offer my complete NO FEAR predictions for this important coaching search. Buddy Boy will not fail us, he is a fucking beast…