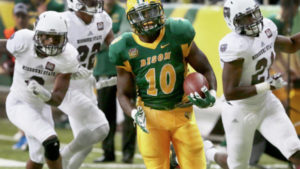 Oh yes, we have now entered the world of real expectations. Where the NFL and the rest of the world believe we have no more excuses for putrid play on Sundays. We have a Franchise Damn Quarterback. We have some special talent in key franchise positions. We have a highly talented front office and a new coaching staff coming in to be lead by our lovable redneck Freddie Kitchens. We won’t be allowed to have an 8-8 season and call it a success. That opportunity is gone and we are all grateful for it. Nobody better complain goddamn it! It’s been over 20 years since we had actual honest to god hope for hosting a playoff game…

But that new world demands a team that plays with consistency, that doesn’t collapse when a starter misses 3 games due to injury. A team that has to overcome it’s own current deficiencies by making plays when they are required. And not only that, those opportunities may come in unexpected places and require an unsung dude to be the man. When that 2nd or 3rd guy on the depth chart makes a bunch of plays in a game? That’s called a playoff contender gang. And we have some serious work to do in order to ensure that’s us for the next 8-10 years.

I am going to call these immensely important guys that will make us playoff contenders Possession Players. These are players that offer a special set of skills and are being asked to play multiple roles on the team. They will be put into positions to make plays that will change possession for us (literally), change momentum, improve field position, get huge stops on 3rd down, convert 3rd downs, get turnovers and fill in for starters who need a break. You won’t see them generally as starters, but they will have to at times, and you will see them make those plays that win games every week.

My logic starts with the classic possession receiver. Always been one of my favorite guys on past Browns teams. Guys like Dave Logan, Brian Brennan and Joe Jurevicius who had the most reliable hands on the team but brought more than that to the field. They were incredibly tough, calm under pressure and simply wanted it more than the guys who were trying to stop them. They knew the entire stadium was counting on them on certain plays and they rose to the occasion, never shrank from it. These are the special role players that you MUST find and keep upgrading on your team to become the depth and to be the special situation guys.

I believe these Possession Players are found within the LB’s, WR’s, RB’s, CB’s and Safeties. They are the positions that are almost always called on to play roles on special teams as well. They can impact the game in several phases and are always needed as depth to step into a starting role when it’s called for. They are also playing the positions that require tremendous physical sacrifice which results in a lot of injuries to starters throughout the season. Their toughness is highly prized.

You want these players to have special attributes like speed, tackling, toughness, concentration, range and leverage. They are going to come from small schools and small conferences as often as Power 5 produces starters at that higher level of player. They will be unheralded but will have shown great production in college and a knack for certain types of production. Don’t ask them to do too many things, ask them to do what they do the best. Have a strategy for finding and filling certain role players on the team.

As we get into specific position strategies for the draft, we will see Possession Players come into focus. Let me assure you, this draft in particular is LOADED with players who fit this bill. You just have to dig a little and ask the right questions. Do some research to find out what special hidden talents they may have. They are part of my plan, and I hope Buddy Boy and the Cool Kids see it the same way!